Can The Golden State Warriors Repeat | Nasser Erakat. Why not? The whole team is coming back this season. They have a good shot to. Things just have to go 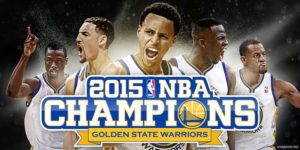 right for the team. Injury’s play a key roll for any team. As long as they stay healthy they should be fine. As we saw last season they can beat any team. I will never count the Warriors out with Stephen Curry shooting 3’s. Don’t forget about Clay Thompson and the rest of the team. I know it’s kind of early to start talking about back to back. It has been 40 years since there last championship, hopefully we do not have to wait another 40 years.

OAKLAND — Upon taking over as coach last season, Steve Kerr ordered some changes around the Warriors practice facility. 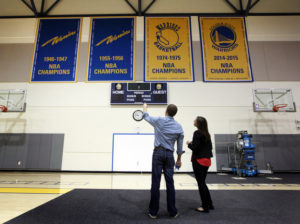 make an All-Star team. Kerr had it removed and explained that individual honors would no longer be part of the decor.

A wall display saluting Stephen Curry’s 3-point record? Gone That’s not why the Warriors were practicing.

Kerr’s home renovation project wrapped up Friday with a new wall-hanging — a 2014-15 NBA championship banner. It was unfurled in a private ceremony for team employees in advance of training camp opening Sept. 29. More

The Golden State Warriors have the team to repeat. They were so dominate last season. With Steve Kerr I think he will tell his players to still be hungry. Last season people didn’t take the Warriors seriously until the second half of the season. They would 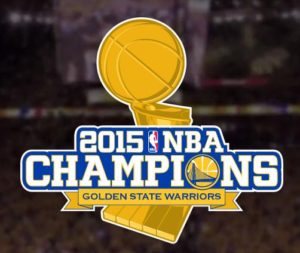 talk about Spurs, Clippers, Thunder and Cavaliers. I understand why no one gave the Warriors a chance to win it all. It shows that any team who has the talent and coaches can win a championship. So yes, when the question was asked, ” Can the Golden State Warriors Repeat | Nasser Erakat. Thanks for taking the time to read this article.