I was watching the US Open Quarterfinal #1 S.Williams vs #23 V. Williams. I really can not say I am a fan of Tennis but when Serena Williams is playing I like to watch.

Also it was sister vs sister. The ratings should be high. I was not completely in the dark, it seems easy to understand the scoring. Some of the “Faults” I still didn’t understand but it was OK. I am enjoying the match. To see that best women tennis player in world. The way it is going it shows why S. Williams is ranked number one.

All eyes in the tennis world will be on sister showdown No. 27 when Venus and Serena Williams take the court on Tuesday night. Serena leads their head-to-head by 15-11, but the rivalry has been more one-sided of late, with Serena winning six of their last seven matches. Similarly, Serena leads their Grand Slam rivalry by 8-5 and has won their last three meetings at majors. They are deadlocked at 2-2 in US Open matches, with Serena prevailing in their last meeting, at the 2008 US Open quarterfinals. Full Article 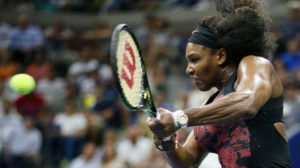 With a win against Vinci, Williams would play for the U.S. Open title, and a Grand Slam of the year’s major tournaments, the first since Steffi Graf’s in 1988, the Associated Press reports.

But Serena got all she could handle from her 23rd-ranked sister, according to AP:

“She’s the toughest player I’ve ever played in my life and the best person I know,” Serena said in an on-court interview. “It’s going against your best friend and at the same time going against the greatest competitor, for me, in women’s tennis.”

Again I don’t know the sport, I have played just for fun. I had a good time and again I was not very good. I did enjoy it more then playing golf. Golf was a pain. Playing tennis there is more action, more moving around. So ” Do you play Tennis like a Professional | Nasser Erakat.