I am a Mustang guy, yes Ford. I had two Mustangs when I was growing up. A 1995 Red V6 Mustang and a 1996 GT V8 Mustang. They were both fun cars. The 2016 models are amazing, I love the body style and also love the Ford Mustang Shelby GT350 | Nasser Erakat. The Shelby GT350 has been a iconic muscle car.

We’ve been here before. We’ve stared down the barrel of a twin-striped Mustang with more than 500 horsepower and the name of a Texas chicken farmer across its fanny. The last one, the 2013 Shelby GT500, had 662 horsepower, in fact, and was said to go over 200 mph. It didn’t, not for us, anyway. Even so, it was what a Shelby Mustang should be, what it 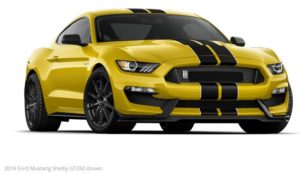 has been for decades: a hot quarter-mile with a side of smoky burnout. It was a muscle car with more. Mustang lovers got sweaty, but as usual, the rest of the auto world just shrugged and moved on with evolution.

Ford says it’s different this time. It says the new Shelby GT350, a name positively gestational with history, is a light-year leap in sophistication and handling. It says the flat-plane-crank V-8 delivers 8000 revelations per minute, that the magnetic suspension and custom, cross-drilled brake system and Michelin superstick tires prove that the company is serious about achieving world-class handling.ore. Mustang lovers got sweaty, but as usual, the rest of the auto world just shrugged and moved on with evolution. Full Article

I hope you liked a little information about the Ford Mustang Shelby GT350 | Nasser Erakat. The base model starts about $48,696 mrsp. I would just like to have

the Ford Mustang GT. It’s such a beautiful looking car. What color would I get, I have had Red and White, I guess Silver or Black. So if you see a 2016 Mustang GT go by, it might be me.

From the deep, guttural rumble at idle, to the wide-eyed force of torque in acceleration, this engine is all about performance. It delivers 435 horsepower* and 400 lb.-ft. of torque* – that’s increased horsepower and torque vs. the fifth-generation vehicle. The engine is intended to maximize power generation from every compression, with large intake and exhaust valves, cylinder heads that feature high-flow ports and intake and exhaust camshafts that have impressive lift. And the icing on the cake – the 5.0L exhaust delivers a more powerful acoustic experience. Full Article

Thank you for listening.