The TSA is out of control. You get to the airport and then you get in line for the TSA. They pull you to the side and you have a larger then the requirement of a styling gel. The TSA agent tells you that you cannot take on the aircraft. Are they afraid that we 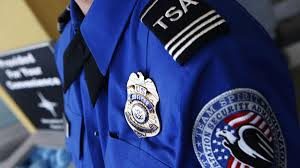 are going to style the pilots hair? We all hear the horror stories of TSA agents stealing, touching and doing other things. I thought these people are trying to protect us. It seems that we need protection from them. They also think that they are in charge of you once you are in line. I guess we can thank Bush for this agency. After the incident  we lost a lot of are rights. At the time it was OK because we needed protection. Unfortunately, it is not hard to be a TSA agent. All you need is a High School diploma. I am not knocking these people but they cross the lines. Is the Transportation Security Administration a Joke | Nasser Erakat. Yeah it is.

The sackings follow a number of controversies over the screening of passengers at U.S. airports since 2010, when the agency adopted heightened security measures including full body imaging and pat downs.

In November, a TSA employee tipped off the agency that a male screener at the airport told her he groped male passengers he found attractive, according to a Denver police report.

In response, a TSA investigator went to the airport in February and saw the screener signal to a female colleague when a certain male passenger entered the screening area, the police report said.

The woman colleague used a touchscreen system to categorize the passenger falsely as a female, which caused a scanning machine erroneously to detect an anomaly and trigger a pat-down of the passenger, the police report said.

The investigator watched as the male screener then used that opportunity to pat down the passenger’s groin and buttocks, according to the police report.

The woman screener was later interviewed by the investigator and told him she had participated in the pat-down scheme at least 10 other times. Full Article

I think that someone really needs to look into the TSA incidents that happen all the time. The way they treat people in unconstitutional, they need to be investigated. 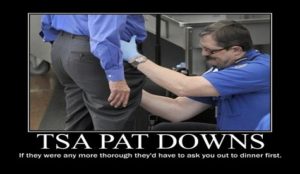 Will that ever happen, I do not think so. Come on people do you really think that water can do anything. The scary part is that the TSA fail to screen important that get on board but they are ready to detain you if your styling gel is too big.

Washington (CNN)The Department of Homeland Security said Monday that the acting administrator for the Transportation Security Administration would be reassigned, following a report that airport screeners failed to detect explosives and weapons in nearly every test that an undercover team conducted at dozens of airports.

According to a report based on an internal investigation, “red teams” with the Department of Homeland Security’s Office of the Inspector General were able to get banned items through the screening process in 67 out of 70 tests it conducted across the nation. Full Article

Is the Transportation Security Administration a Joke | Nasser Erakat. What do you think? As I stated before someone really needs to look into this agency. A independent investigation. Well happy flying and I hope you enjoyed this article.