I didn’t know if I should write this but I am going to. After seeing the first team in the NBA Finals to come back from a 3-1 deficit, I decided to write this. I want to start this by saying this is  nothing new, that Professional sports are fixed. These days

every sport in America and the World has a end game. The bottom line is that it all comes down to Money and corruption. Maybe because I am a fan of the Oakland Raiders, Golden State Warriors and Oakland A’s, I could just be bias.

Lets start with the most recent fix in sports and that was this years NBA Finals. We all saw that when the Warriors took a 3-1 lead and they were heading back to Oakland for a game 5. The NBA needed to do something and they did, they suspended Draymond Green. The little swipe that he did to LeBron James, was nothing compared to what James did to Green, stepping over him. Then two days after, we hear that the NBA suspended Green for game 5. Deep down inside, I new that the series would go to Cleveland.

Why, you may ask? First, you had the Warriors ready to end this series 4-1 but the NBA stepped in after hearing LeBron James and his coach complaining. Draymond was going to get suspended for what he did to James.

The Three most infamous Rigged games in NBA History

David Stern has Rigged hundreds of games in his 24 years in office. The three that we rank as the most important are Game 7 of the 2000 Western 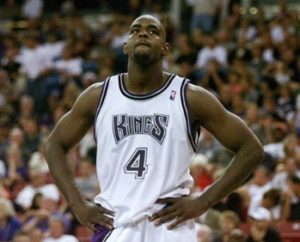 Portland won 59 games during the regular season. The Trail Blazers were big, skilled & athletic. They were young & old.  Sabonis, Pippen, Schrempf were a little past their prime, But Wallace, Stoudmire, O’Neal & Wells were young. They had a starting 5 of 7’3″ Arydas Sabonis, 6″10″ Rasheed Wallace, 6’9″ Scottie Pippen, 6’8″ Steve Smith, 6’3″Damon Stoudmire. Their bench consisted of Brian Grant  ( a real hustler on the boards) Bonzi Wells, Jermaine O’Neal ( came in out of high school ) Detlef Schrempf, Greg Anthony & Stacey Augman.

Sacramento won 61 games during the regular season. They had a starting 5 of Chris Webber, Mike Bibby, Doug Chritie, Pega Stojakovic, Vlade Divac. There Bench was Bobby Jackson, Hedo Turkoglu, Scott Pollard & Lawrence Funderburke. The Kings were a high octane offence that like to run & gun.

” too many of the calls in the fourth quarter  were  stunningly incorrect , all against Sacramento. I have never seen officiating in a game of this consequence as bad as that in Game 6.” – Michael Wilborn Washington Post

In all the Lakers took 27 foul shots in the fourth quarter. With Sacramento up 3 games to 2 this rigged game prevented them from advancing to the NBA Finals. For the game the Lakers took 15 more FTA both Scott Pollard & Vlade Divac both fouled out on plays where they did not even touch the Laker player.

” I’ve been covering the NBA for 30 years, and it’s the poorest officiating in a important game I’ve ever seen,” David Dupree USA Today

The Dallas Mavericks 2005-2006 season was indisputably the greatest in NBA history.

This should be no surprise to any sports fan. It always comes down to the money. This last NBA Finals proved it, when the Warriors were up 3-1.  James and Company were looking like this series is over but everything changed.

Adam Silver had to come out and say the he “swears that games are not fixed”.

Before the NBA finals started ESPN made a 30 for 30 special named “Believeland”. The funny thing about this documentary, was that there was a film crew in Cleveland during the NBA Finals Game 7. ESPN wanted their show to have a happy ending.

LeBron James even said last year after losing to the Warriors that the “NBA is rigged”.

Well don’t take my word, I always tell people to do their own research. There is so much information out there that you can find what you want. Thanks for reading.