The Oakland Raiders and Los Angeles Rams played on the second part of the Monday special on ESPN. Jon Gruden returned to the sidelines where he began his coaching career with the Silver and Black. With the surprise move that the Raiders traded their best player and future Hall of Famers Khalil Mack. The Oakland Raiders looked to lose and lose badly on 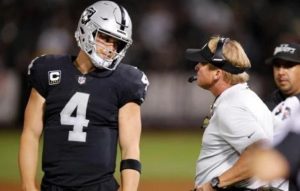 Monday night. All the talk shows and NFL veterans couldn’t believe that the Raiders would trade Mack. A first-round draft pick, that they finally hit on. The Oakland Raiders do not have a good track record of selecting first-round talent. Once they landed Mack, it was a blessing.

Then everything changed on that Saturday morning when the news came out that the Raiders and Bears agreed on a trade. The Raiders would receive two first-round draft picks in the years 2019 and 2020 and the Bears would receive Khalil Mack.

The Bears play on Sunday night

So everyone including Jon Gruden would be able to see Khalil Mack play for the Bears. Mack did sign an amazing contract which is valued to be six-year, $141 million contract extension which included $90 million guarantees and a $60 million dollar signing bonus. Khalil Mack showed why he was Defensive Player of the Year in 2016 and why he deserves every penny of that contract. In the first half on the Bears-Packers game, Kahlil Mack recorded  1 Sack, 1 interception for a Touchdown, Force Fumble and 3 Total tackles. The Bears would go on to lose the game after being up 17-0.

How would the Raiders show up against a team that most are picking to go to the Super Bowl? Well the game started great, the Raiders would drive down 75 yards and Best mode (Marshawn Lynch) would get into the end zone. The Raiders would not score another touchdown and only add six more points. They would take the lead into halftime at 13-10. Then everything fell apart. The Raiders defense got to Jared Goff once. There was no pressure on him for most of the game. Derek Carr seemed to be scared in the second half. Carr would end up throwing three interceptions and one would be returned to for a touchdown. The final score would be Rams 33 and Raiders 13.

The Raiders will have another challenge as they will face a rival, the Denver Broncos in Denver. This could be another bad game for the silver and black.  The Oakland Raiders could be looking at starting the season 0-2. Was the Jon Gruden experiment a bad idea or will we have to see more of this season?