The Oakland Raiders and Kansas City Chiefs played a game to remember. For the Raiders, this win did save the season. A loss tonight would have taken them to 2-5 and end their playoff chances. Derek Carr, Amari Cooper , Khalil Mack and the rest of the Oakland Raiders played like this was it. I’m glad to see that they came to play. The four game losing streak was not pretty, they looked nothing like last years team. The Raiders still have a long way to go and need two wins to get above five hundred in the standings. 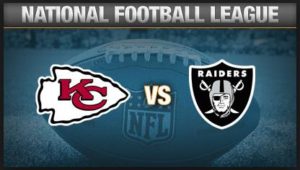 This game showed that the Oakland Raiders did have heart and were not going to get blown out. They have ten days off before they have to travel to the East Coast and play the Bills. Enjoy this win but be ready to play the next game. The Bills and Dolphins are games you need to win. If they can play like they did tonight or play with the same emotions as tonight, they should be fine. Amari Cooper came to play and it was nice seeing what he can do.

The defense that was not really playing well but they did enough to win the game. The defense has to play better, they gave up a lot of big plays tonight. At points in the game it seemed that Kansas City was going to take over the game but the Oakland Raiders stayed in it and the defense gave the Raiders offense a chance at the end to win the game.

A wild finish between the Raiders and Chiefs

An exciting game not only for Raiders fans but for any football fan. It seems like big plays after big plays. Amari Cooper had over two hundred yards receiving. Cooper finally showed up tonight. So far this was the best game in the NFL this year. It had everything, you had both teams coming off a loss the week before. Kansas City is number one in the division and Oakland is last in the division. This was big for the Raiders, it saved the season and now hopefully this can help them get some more wins.